by The Denver Botanic Gardens August 19, 2019
Inside UMB

Queue the squeal of the cassette tape as we rewind the tunes. Denver Botanic Gardens’ Summer Concert Series began in 1980. As we are currently in the middle of our 40th concert season and our 10th year with presenting sponsor UMB Bank, we thought it would be fun to look back on how the series has grown over the years. 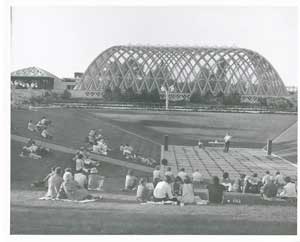 As it can be assumed from this 1980 photo, the inaugural concert season was an intimate and informal affair. Local classical and jazz musicians played on the amphitheater concrete pad, without a stage or lights and minimal amplification.

By the mid-1980s, we partnered with Colorado Public Radio (CPR) for programming and promotional support. At this time, the concerts were a free offering for members of both CPR and the Gardens. It soon became a public ticketed event.

The caliber of the artists grew, along with attendance and visibility. The musical offerings were diverse and included some artists that still play at the Gardens such as Béla Fleck and Judy Collins. Colleagues also remember seeing Beausoleil, Modern Jazz Quartet and international artists such as Olodum and Marianne Faithfull.

It has been incredible to see the caliber of artists and production, along with audiences grow over the past 39 years. We are grateful for UMB’s ongoing support that allows us to host local, national and international artists on the UMB Amphitheater stage. We look forward to many more nights of incredible live music set against the beautiful backdrop of the Denver Botanic Gardens. We can’t wait to see what the 41st season brings in 2020!

Denver Botanic Gardens was founded in 1951 and is considered one of the top botanical gardens in the United States and a pioneer in water conservation. Accredited by the American Alliance of Museums, the Gardens’ living collections encompass specimens from the tropics to the tundra, showcasing a plant palette chosen to thrive in Colorado’s semi-arid climate. The Gardens is a dynamic, 24-acre urban oasis in the heart of the city, offering unforgettable opportunities to flourish with unique garden experiences for the whole family as well as world-class education and plant conservation research programs. For more information, visit us online at www.botanicgardens.org.