Spiking inflation remains in the limelight. While it’s too early to call for peak inflation, there is evidence that core inflation is starting to abate. The swift spike in inflation has led to a strong reaction from the Federal Reserve, causing its narrative regarding interest rates to change swiftly. These big shifts have shaken consumer confidence. So far, the Fed has continued to modify its rate expectations higher, but a decision to pause or lower rates can happen just as quickly and becomes a possibility once the economy slows and inflation starts to subside.

Consumers continue to be nervous about inflation. Higher energy prices, food prices and mortgage rates have changed consumer’s purchasing patterns. Consumer confidence indices, along with business confidence, continues to plummet, increasing the likelihood of a recession.

On the other hand, the manufacturing data has been shown mixed signals. New Orders, a leading indicator, has dropped below the critical 50 level suggesting a recession is on the horizon. Yet other manufacturing data remains robust and suggests the Fed may be able to orchestrate a soft landing it is hoping for and avoid a recession.

The all-important labor market has yet to flash a warning sign. Unemployment at 3.6% and payroll growth above 4%, both remain resilient and reinforce the argument that a recession is not imminent.

The Great Slowdown we’re facing will more than likely morph into a short-lived, mild recession sooner than we anticipated, perhaps by the end of this year or early next year. Given the mixed data, we think the probability of a recession is a coin toss. In addition, the National Bureau of Economic Research, the official recession caller, has changed its definition of a recession. It’s no longer as simple as two consecutive quarters of negative GDP.

Outlook for what’s ahead

This year, while GDP should remain positive, we expect it to fall somewhere between 1.5% and 1.9%, a Great Slowdown from last year. The data leads us to believe that we will see some type of recession toward the end of the year or in early 2023. Unemployment will likely remain around 3.6% this year. Fed Funds expectations have risen to 3.50% this year. However, the 10-year treasury hit 3.50% earlier in the year and may trend lower by the end of the year. Historic data tells us we could see a rally in stocks, which could get us to somewhere between a -5% or maybe a 0% rate of return for the calendar year. 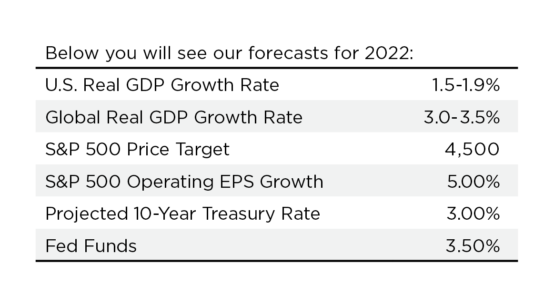 Inflation and the Fed

Inflation continued to surprise on the upside during the second quarter, with headline CPI hitting 9.1% in June. Core measures of inflation (excluding food and energy) have moved slightly lower over recent months, but remain stubbornly higher than the Fed’s target (2.0–2.5%). Gasoline and grocery prices are consuming a super-sized portion of the average family’s monthly spending, and are threatening to begin crowding out purchases of other goods and services. The Fed is now forced to address the painfully high headline CPI numbers in an aggressive fashion, and its tone turned even more “hawkish” at the end of the quarter.

The Fed moved overnight rates up by 0.75% in June, to 1.75%. Along with this aggressive move, the Fed’s forecast for the next 18 months moved substantially higher. They now estimate that overnight rates will reach 3.50% by year-end, and then move even higher in early 2023. This was a sharp upward revision to previous estimates, and a clear signal that they are willing to risk severely dampening economic activity in order to reign in Inflation. This new assertiveness from the Fed put a cloud of heightened uncertainty over the financial markets. As market participants struggled to discern whether we are headed toward a soft landing or a moderate recession, interest rates continued to grind higher, and bond returns, again, turned sharply negative for the quarter.

We continue to believe that inflation will move modestly lower towards year-end, as supply and labor constraints begin to moderate. Food and energy prices tend to move in rapid cycles—leading us to expect them to soften over the next few quarters. However, housing costs have become a big driver of the inflation story. Housing and rent prices are considered to be “sticky”—moving up and down in longer, more sustainable cycles. It is unlikely that housing cost pressures are going to abate over upcoming quarters, and this will make it unlikely that inflation will fall smoothly to the Fed’s target of 2.0-2.5%—it may become stuck in the 4.0-4.5% range.

If inflation is trending lower, the Fed may be able to pause rate increases and soften its messaging about future moves. This could be a welcome boost for market participants late in the year.

The probability of a mild recession has increased, we believe there is a 50% chance of a recession.

High-yield (HY) assets were rocked by the same risk-off sentiment that hit the equity market during 2Q. Returns turned sharply negative, as the aggressive Fed commentary forced investors to price in the possibility of a recession. HY spreads moved out sharply, but not in the magnitude that we typically see before oncoming recessions. Consumers and the economy appear to be on strong enough footing to expect, at worst, a mild and short-lived recession, if one were to occur. For those reasons, we continue to maintain allocations in the HY sector, as part of an overall neutral exposure to risk assets.

Despite the new outlook from the Fed, our forecast for the 10-year treasury rate is only 3.00% for year end 2022. The bond markets are indicating that the Fed’s fight with Inflation is nearing an end, and longer-term interest rates are pointing to lower inflation and modest economic growth in 2023 and beyond. We believe long-term rates will move only modestly higher through year-end, and will settle around 3.00%, well below the overnight rate. Yields are now substantially higher than when the year started. With rates moving only modestly higher from here, we now expect bonds to start producing positive returns during the second half of the year.

Equity markets: A historically tough start to the year

U.S. stocks continued to fall in the second quarter, prompting the S&P 500’s worst first-half performance since 1970. Much of the losses were driven by spiking inflation and the policy response from the Fed, leading the S&P 500 to tumble 20% YTD, while the tech-heavy Nasdaq Composite index declined 29% YTD.

How does inflation impact equities? We focus on three types of inflation; input inflation, wage inflation, and consumer inflation:

While inflation has been a headwind all year, we’re starting to see some signs of moderation in things like commodities, a positive sign for stocks.

An economic and earnings slowdown/deceleration is mostly priced into equity markets. Even though headline GDP is negative, nominal GDP (which is not adjusted for inflation) should remain positive and help drive revenues. Moderating wage growth should also help keep margins elevated, meaning even if the economy slows revenue can still grow. All of this supports a potential back-half of the year rally in stocks.

While valuations have already compressed due to higher inflation, there is some good news. Commodity prices have been coming down, stocks do well when inflation decelerates and even if we do enter a recession, stocks tend to lead the economy and historically, stocks generate robust returns following recessions.

Therefore, we have an optimistic outlook for a strong rally in the back half of 2022.

Our 4,500 year-end price target for the S&P 500 implies a -5% total return for the year but includes a 20% rally in the back half of the year. While a strong rally may seem like a big ask, history shows that robust rallies can happen quickly, especially around recessions, or when inflation stabilizes. 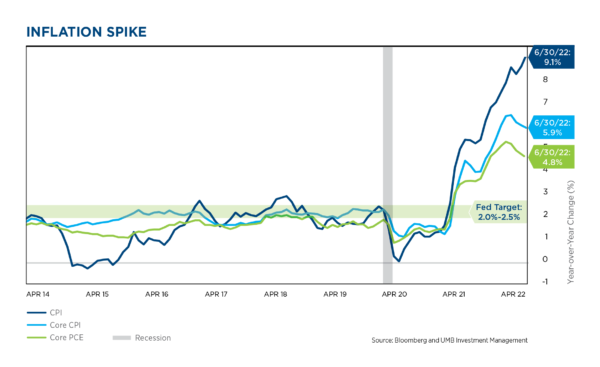 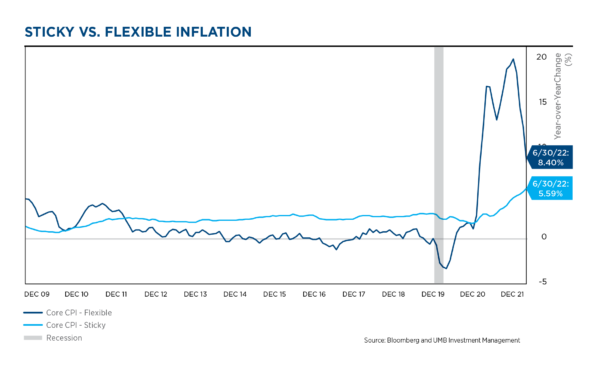 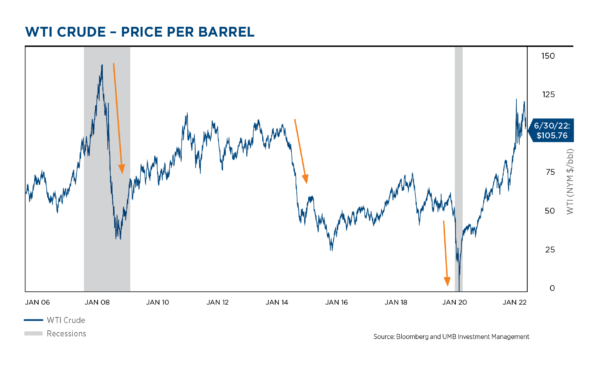 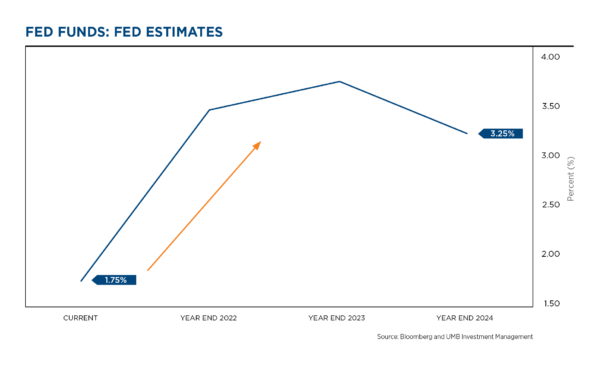 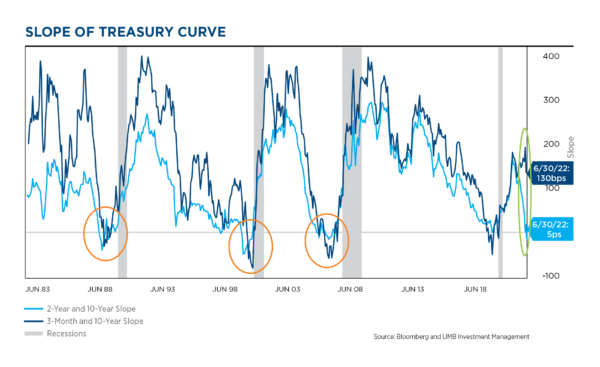 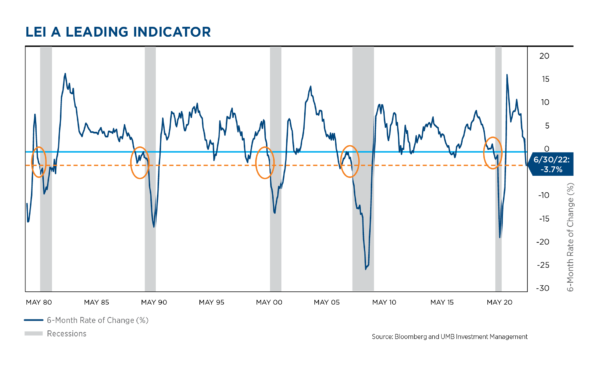 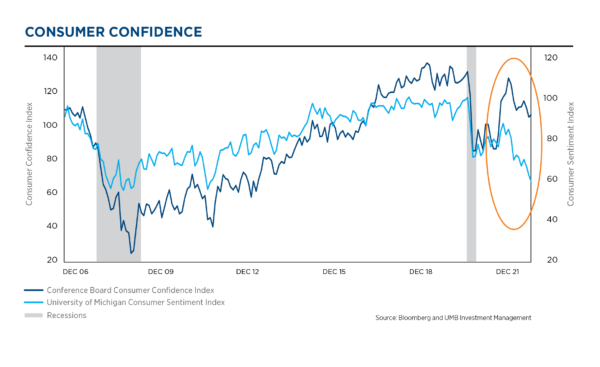 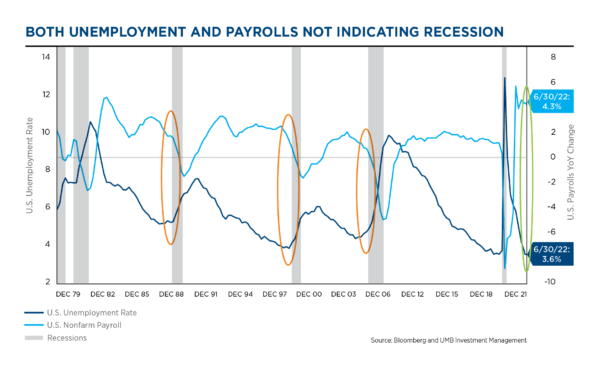 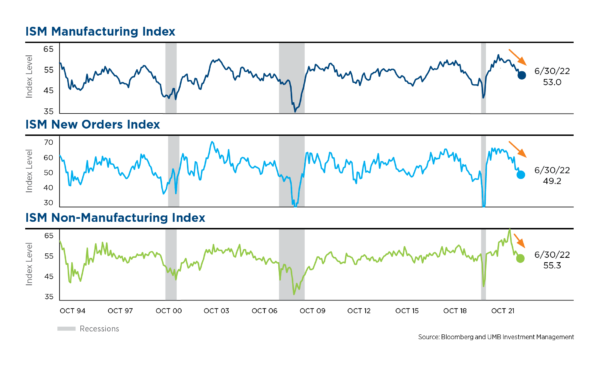 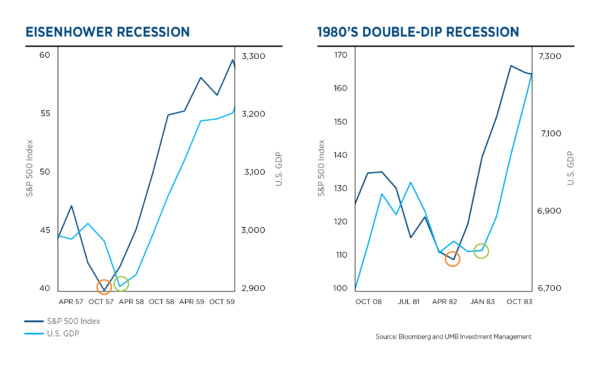 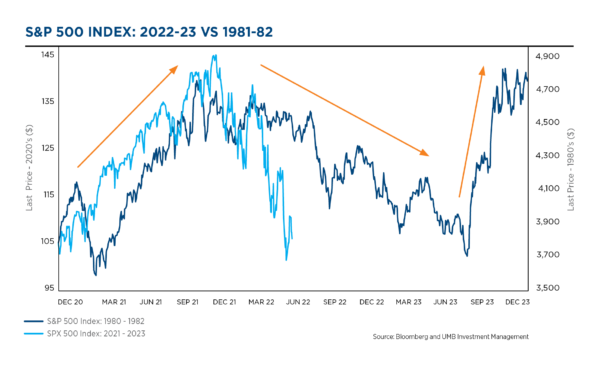 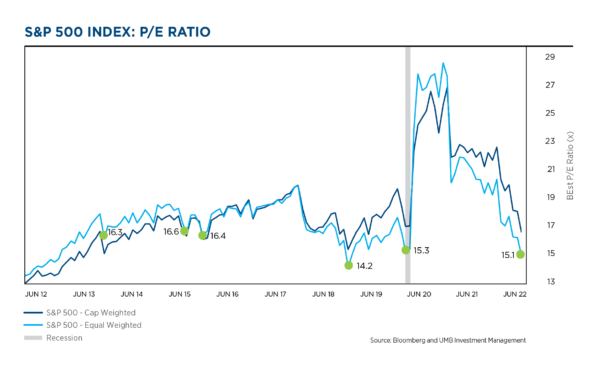 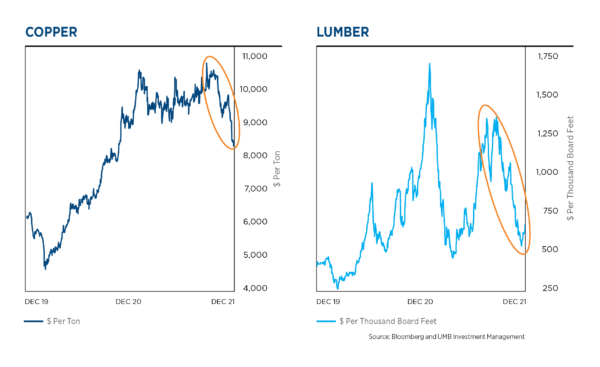 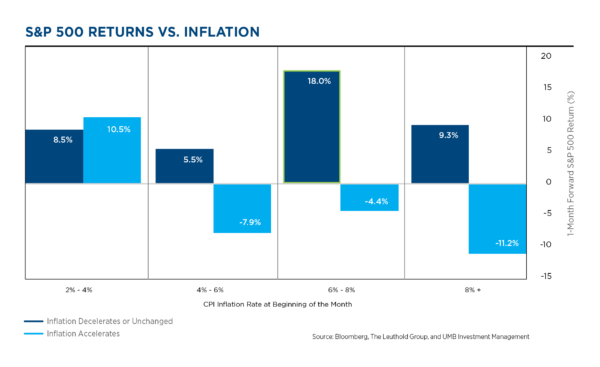 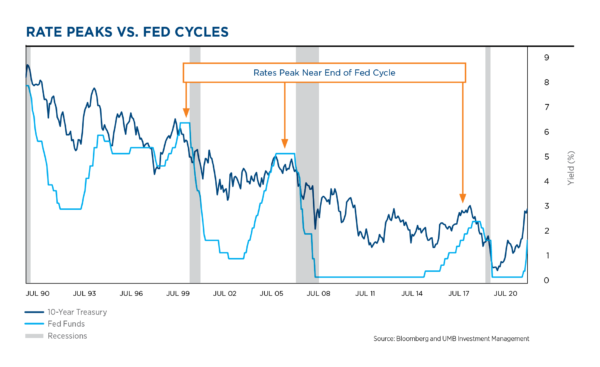 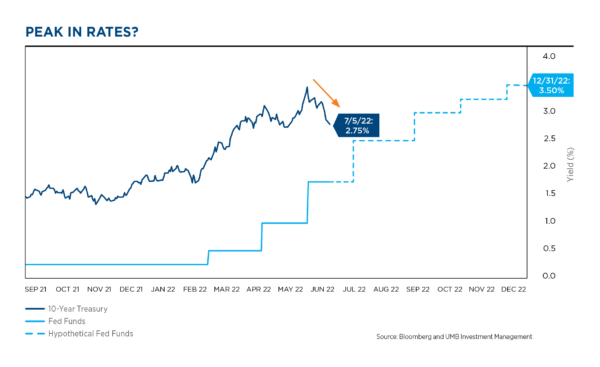 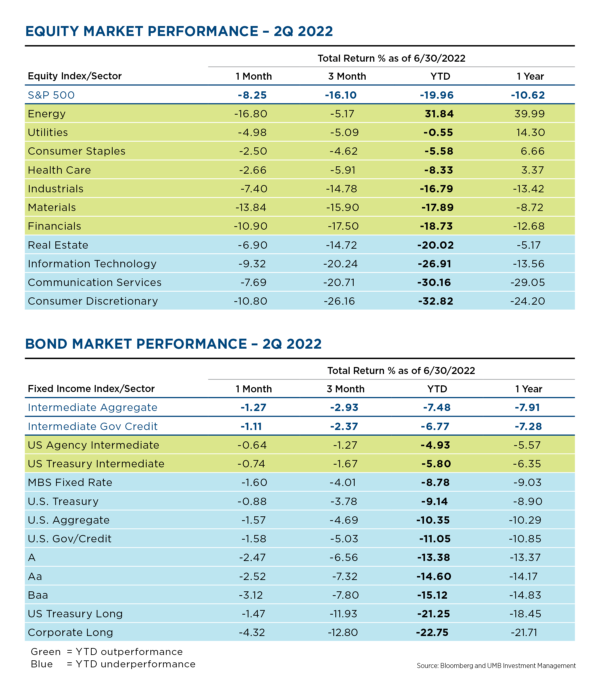 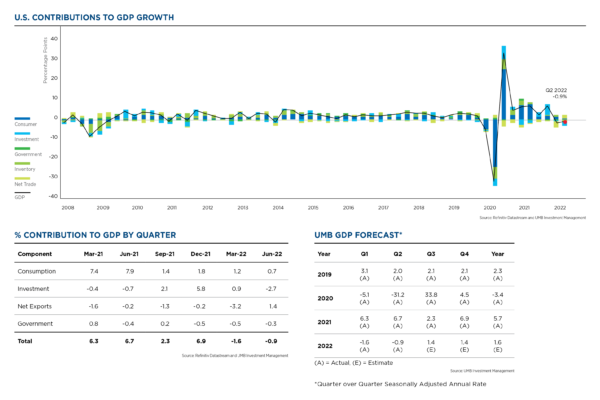 This report is provided for informational purposes only and contains no investment advice or recommendations to buy or sell any specific securities. Statements in this report are based on the opinions of UMB Investment Management and the information available at the time this report was published.

All investments involve risk, including the possible loss of principal. Past performance is no guarantee of future results. Neither UMB Investment Management nor its affiliates, directors, officers, employees or agents accepts any liability for any loss or damage arising out of your use of all or any part of this report.

You may not have an account with all of these entities. 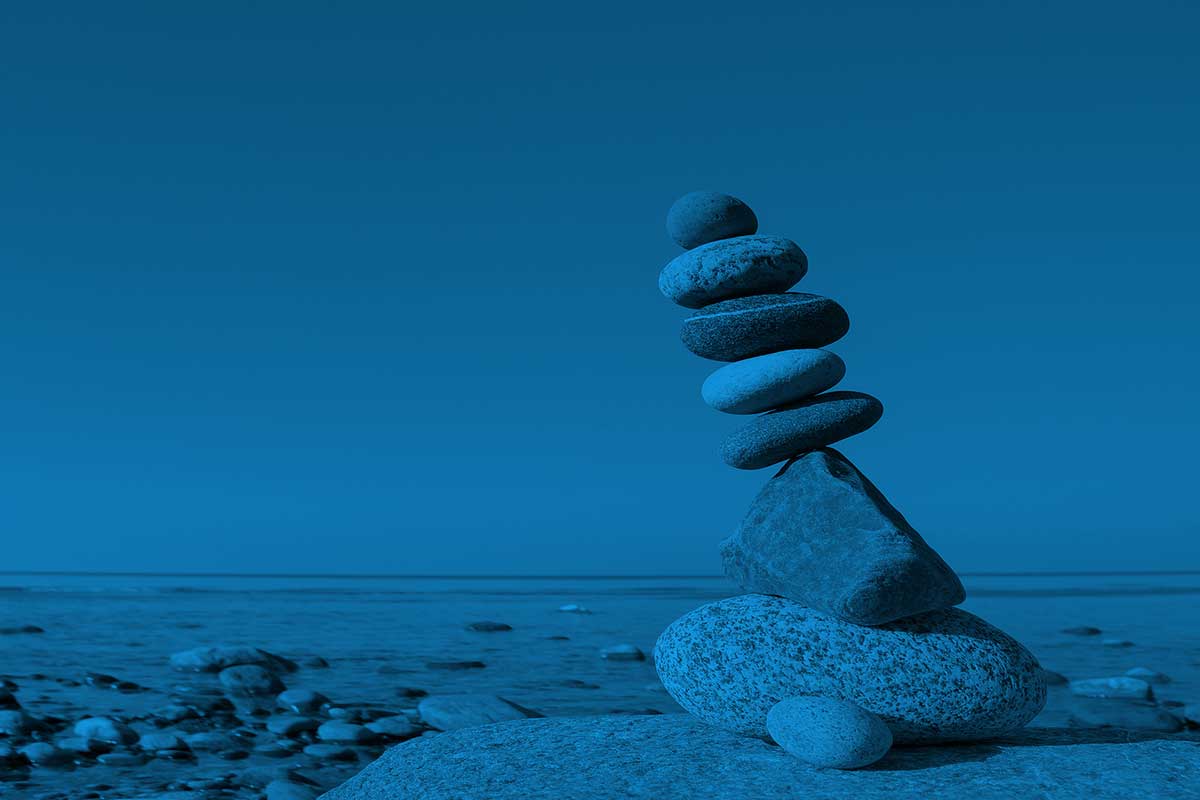 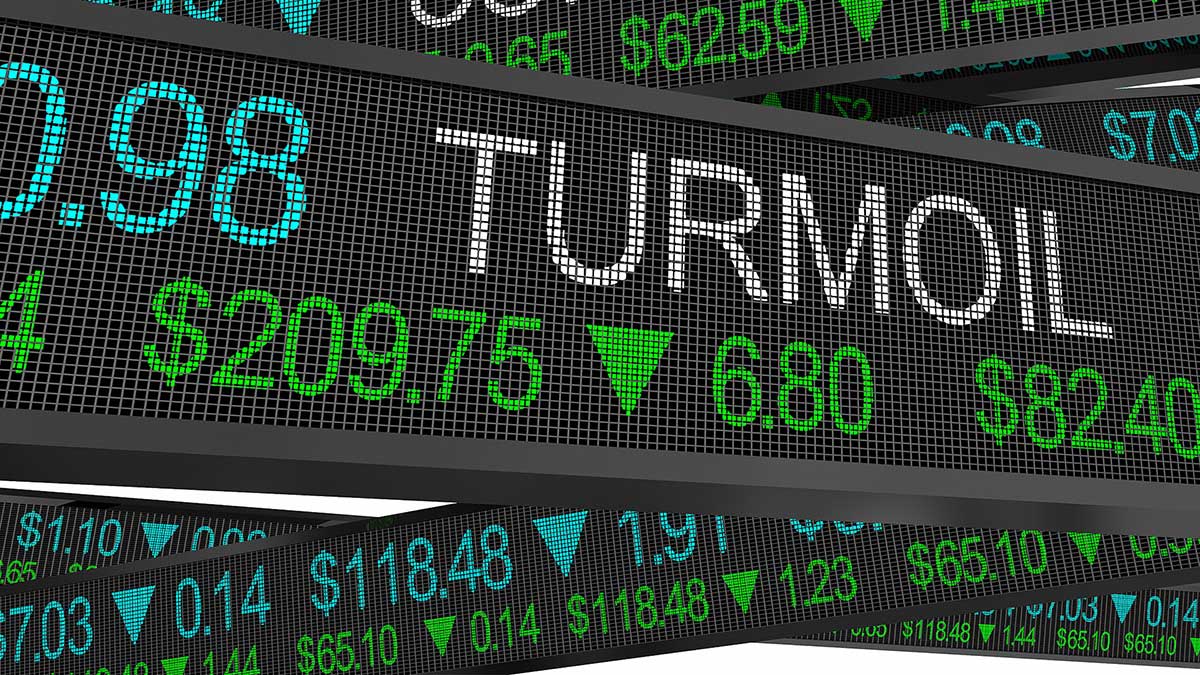