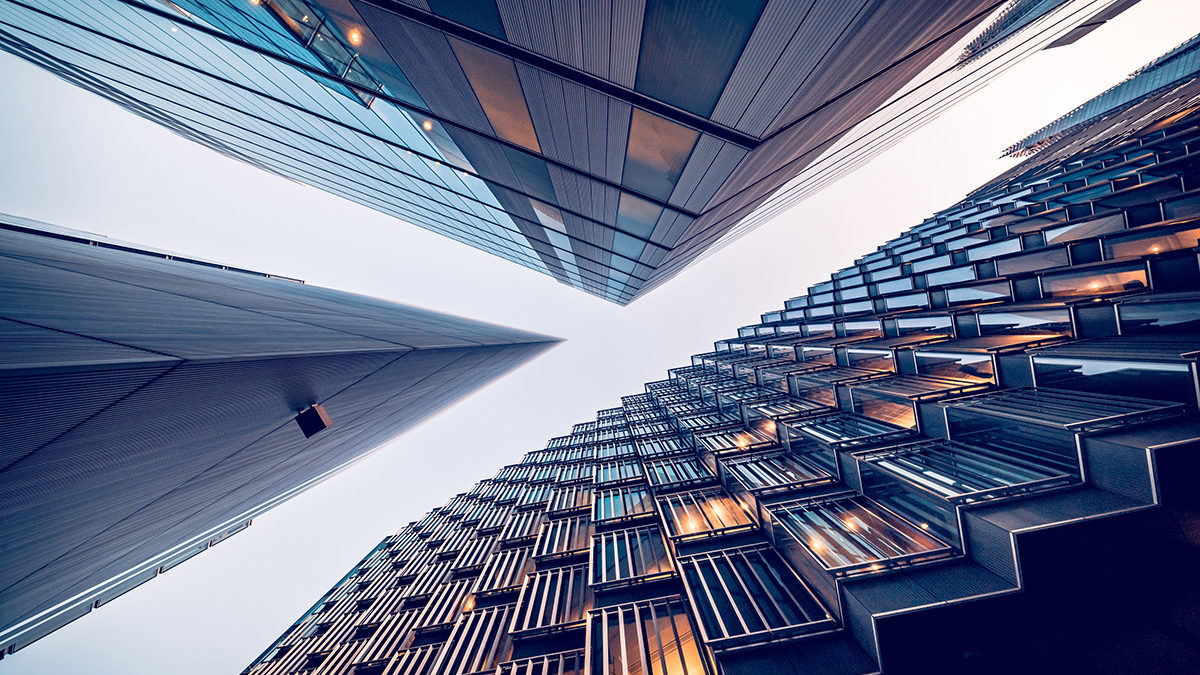 For community banks, the strains of this year’s economic crisis call up memories of the 2008 financial crisis. There are, however, distinct economic differences between the two situations. Highlighting those differences helps clarify a path to recovery now.

The following charts are key parts to that recovery story. They were among those we shared during a recent UMB-sponsored webinar for community bank presidents. If you’d like to view the full webinar, a recording is available below.

While the decline in GDP in the current crisis is much sharper than 2008, the recovery is anticipated to be much quicker.

The 2008 financial crisis was brought about by systemic problems in the housing market. In 2020, the economy was in decent shape, no major systemic issues and the Fed reacted much faster. As the chart shows, the U.S. economy was experiencing moderate GDP growth prior to the pandemic.

Many economists are now saying that the recovery will most likely be U-shaped, with the GDP running in the red for the second and third quarters before the recovery really takes off. 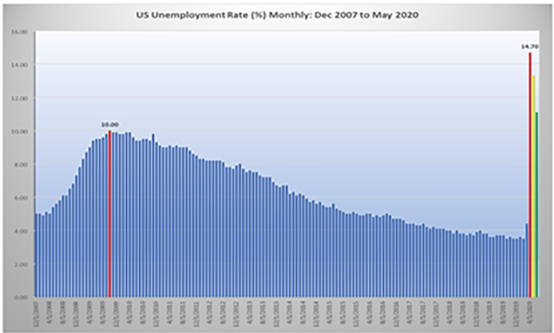 Unemployment in the current situation is vastly different than unemployment during the last financial crisis. In 2008 and after, unemployment gradually increased to its peak of 10% through a domino effect as business failures then led to suppliers of those businesses also failing.

The current situation, by contrast, is a true shock. Businesses just shut down all at the same time. Unemployment spiked to 14.7% in April but came down 13.3% in May and 11.10% in June. Most of the jobs added in June were in retail and hospitality.

Like GDP, most economists now expect that it will take a longer time for unemployment to decline. Most believe that not all the jobs will come back but shifts in the economy may provide opportunities for new jobs. 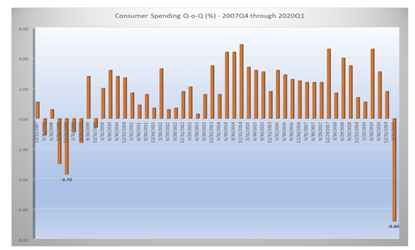 Changes in consumer spending will depend on how the job market recovers. Future expectations in the recent consumer confidence release have improved, suggesting consumers believe the worst is behind us. However, there is reason for worry. Although 80% of the recent layoffs are classified as temporary, and many workers believe they will be back at work soon, boosting confidence, KC Mathews, UMB’s chief investment officer, and has estimated half of those jobs will be permanently eliminated.

The CARES Act, providing extended and increased unemployment benefits, has delivered an income to many, and in some cases, more income than when working. The additional unemployment benefit of $600 per month expired July 31, but there is a high probability that more stimulus is on the way, which would help consumer spending. 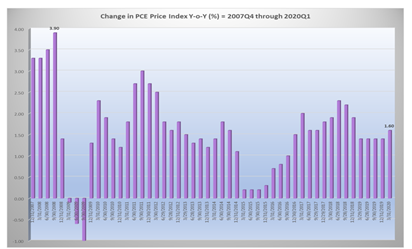 The PCE index, the Federal Reserve’s (Fed) preferred measure for inflation, was low coming into the current crisis, and economists surveyed by Bloomberg are expecting a sharp decline in inflation for the second quarter.

By contrast, oil futures went negative in April but finished the month at a little more than $18 per barrel—still far below the prices experienced during the last financial crisis, which should help the consumer. Real GDP will be positively impacted by low inflation. 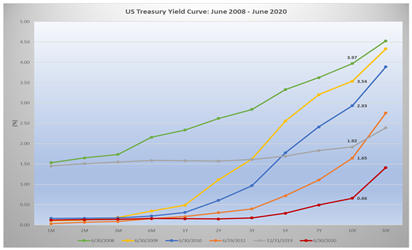 The treasury yield curve was much steeper and longer-term maturities had much higher yields at the beginning of the last financial crisis (the green line in the accompanying chart).

The yield curve remained steep through the middle of 2012 (yellow, blue and orange lines). But by the time the coronavirus crisis hit, the yield curve was very flat. The Fed has less ability to impact longer term rates but acted quickly to reduce short term rates.

As a large financial institution, UMB Bank’s Investment Banking Division can provide access to a comprehensive suite of solutions. From market data and robust technology platforms, to fixed income sales and insightful modeling, your full-service UMB Bank experience provides support that’s relevant to you, with relationships that last for the long-term.

Disclosure: This communication is provided for informational purposes only. UMB Bank, n.a. and UMB Financial Corporation are not liable for any errors, omissions or misstatements. This is not an offer or solicitation for the purchase or sale of any financial instrument, nor a solicitation to participate in any trading strategy, nor an official confirmation of any transaction. The information and opinions expressed in this message are solely those of the author and do not necessarily state or reflect the opinion of UMB or UMB Financial Corporation. UMB Bank n.a., 928 Grand Boulevard, Kansas City, MO 64106

All of the above charts are sourced from Bloomberg 2020.

UMB Market – an interactive activity to practice healthy shopping, on a budget this holiday season

Do you have a will or a trust established?