The impact of COVID-19 on the economy

The impact of COVID-19 on the economy

In addition, the Center for Disease Control and Prevention (CDC) issued a warning to prepare for an eventual outbreak of COVID-19 in the U.S., adding additional negative sentiment to markets.

China, the second largest economy in the world, is at risk of entering a recession. Millions of Chinese citizens are quarantined, cities are shut down, and travel and logistics remain stifled, all of which could lead to economic growth in China potentially contracting as much as 14 percent in the first quarter.

There is some good news. The number of cases in China seems to have stabilized and the government is encouraging people to return to work. According to the Chinese Commerce Bureau, about 70 percent of exporters in the eastern Shandong and Zhejiang provinces, which are major manufacturing hubs, have resumed production.

The wild card is the impact the month-long disruption in the supply chain will have on the U.S. The disruption will not be uniform, as many emerging economies, primarily in Asia, will be significantly impacted. Developed economies, such as the U.S., may see relatively minor disruptions. The growth impact will depend on the severity and duration of the virus outbreak. Historically, U.S. growth rates weakened modestly around disease epidemics and rebounded the following quarter.

The stock market valuation was getting a bit frothy even before the COVID-19 outbreak, with the S&P 500 hitting new highs. Then came the news that the virus was spreading, and the market sold off sharply.

Earnings eventually drive stock prices. Interest rates and inflation are primary drivers of equity valuations. Corporate earnings in 2020 may be negatively impacted by constrained supply chains and demand destruction. If the virus is not contained quickly, our 5 percent earnings growth outlook for the S&P 500 in 2020 is at risk.

Foreign sales account for approximately 30 percent of aggregate S&P 500 revenues, while direct China revenues are only 2 percent. However, China is a hub of global supply chains, which could crimp sales and encumber U.S. firms’ production.

Bear in mind that markets do correct; it is normal and healthy. On average, markets have at least one correction greater than 10 percent each year. Since 1980, the S&P 500 has an average intra-year correction of -13.8 percent. The S&P 500 has gone 290 days without a 10 percent correction. 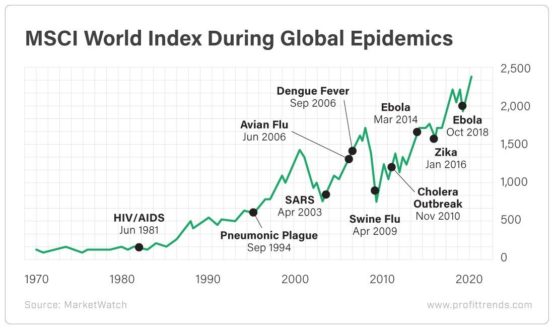 The chart below shows previous virus outbreaks and their impact on global equity markets. Virus outbreaks often have a negative short-term impact on markets, but typically have a strong recovery over the following months. For example, the MSCI World Index returned 22 percent six months following the SARS outbreak in 2003.

The bond market is signaling, and has been for quite some time, deteriorating economic conditions. The recent rally in bond prices, which has pushed yields down, is due to the virus outbreak. This is a common pattern during shocks. Analyzing five prior epidemics, Treasuries tend to outperform the S&P 500 immediately after the outbreak. This is due to a risk-off reaction, as investors seek a safe harbor in U.S. Treasuries. However, three to six months after an outbreak, U.S. equities outperform bonds and yields normalize

The chart below supports lower yields in an epidemic. Typically, yields fall by approximately 60 basis points. Since the outbreak on January 17, the 10-year Treasury yield is down 50 basis points. 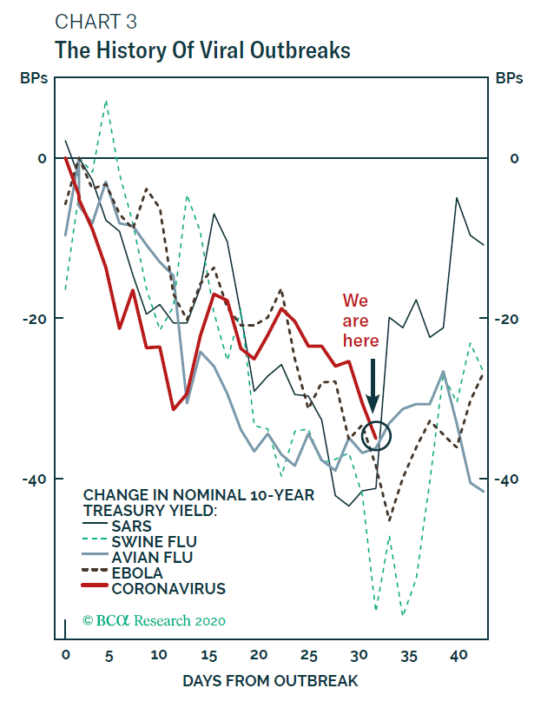 Interest rates appear to be pricing in the worst-case scenario – a pandemic spread of the virus. We believe the bond markets are over-bought at this time, and our base case is that rates will rise back to where we started the year less than 60 days ago. However, we know there is a reasonable risk that the virus will continue to spread, making the bond markets correct. Given all the unknown variables, this is an unforecastable situation at this time.

We are not recommending any changes to our asset allocation strategy at this time. Our recommendation to overweight U.S. equities continues, as the U.S. remains a safe harbor relative to the rest of the world.

GDP growth impact will depend on the severity of the virus outbreak. In the U.S., GDP could negatively be affected by 0.80% in the first quarter. However, much of that may be recovered in the second or third quarter. Annual GDP in 2020 may be impacted by 0.10% and skewed to the downside depending on the containment of the virus. Our current 2020 US GDP forecast remains at 1.6-2.2 percent.

Read and watch KC in these channels:

What’s Next? The Election and the Impact on the Economy (webinar)
The road to recovery: The economic impact of the presidential election
How COVID-19 and the CARES Act may impact your healthcare benefits
Bridges and stimulus versus the economy and stocks