The great debate: Transitory inflation or here to stay?

One year ago, at the central bank’s annual symposium in Jackson Hole, Wyoming, Federal Reserve Chair Jerome Powell announced a new policy framework. The new approach would take a more relaxed stance on inflation. The Fed now seeks inflation that averages 2% over time, a step that implied allowing for periods of overshoots.

Fast-forward a year, and the Fed is putting this new framework to the test – a real-life, high-stakes test. After a decade of stubbornly low global inflation, the abrupt shutdown and subsequent reopening of the economy has caused a sharp rise in prices. While it’s easy to point to supply-chain disruptions as temporary imbalances that should prove to be “transitory”, the 4% plus Consumer Price Index (CPI) are certainly alarming.

So, is Powell as unphased as he appears on camera, or is it secretly keeping him up at night? We will take a few minutes to present both sides of the debate.

Over the 25 years preceding the pandemic, prices of durable goods in the U.S. were in decline, with inflation averaging -1.9% per year. Technology efficiencies, globalization, and price transparency have put downward pressure on the price of goods. Meanwhile, the transition toward a service-based U.S. economy put upward price pressure on the price of services. That is, until COVID-19 turned everything on its head.

The pandemic made many services hard to consume (think leisure and hospitality). Consumers flush with stimulus cash redirected spending toward durable goods. For example, everyone stuck at home decided it was time to take on those home improvement projects, driving up durable goods demand by 20%. At the same time, health concerns made keeping factory production up and running difficult, affecting the available supply of goods.

Another great example is new and used vehicles. When the economy and mobility came to a screeching halt in 2020, automakers canceled microprocessor orders as they anticipated reduced demand for cars. In turn, chip factories ramped down production. However, the opposite happened. People no longer felt comfortable taking public transportation and started looking for new and used cars. Demand for vehicles spiked even further with faster than expected availability of vaccines. The bounce back in auto demand caught both chip and car makers off guard and behind the curve, causing new and used car prices to rise rapidly. As a result, used car prices were up an incredible 42% over the prior year as of July 2021.

We have since seen moderation in some of the most highly affected categories. In July 2021, car prices rose just 0.2% month-on-month, and airline fares fell 0.1% from August. The trend continued in August, with used car prices dropping 1.5% and airfares falling 9.1% for the month. These are good examples of categories impacted by re-opening factors that cooled off notably the last two months.

While autos are the most glaring example, there are many more examples of this type of price action that the Fed deems transitory, such as lumber prices, oil and gas, airline and hotel fares, etc. So far, the inflationary burst has been overwhelmingly driven by a narrow group of sectors deeply affected by the COVID-19 shutdowns. History has proven that supply and demand dynamics are very efficient at correcting themselves.

Sectors experiencing the most inflation may begin to see that rising prices wear on consumers, tamping down demand. Once sectoral balance is restored, inflation should normalize. Below is an interesting graph showing contributions to CPI by reopening vs non-reopening factors. Here we see the reopening components showing up as a drag last month. 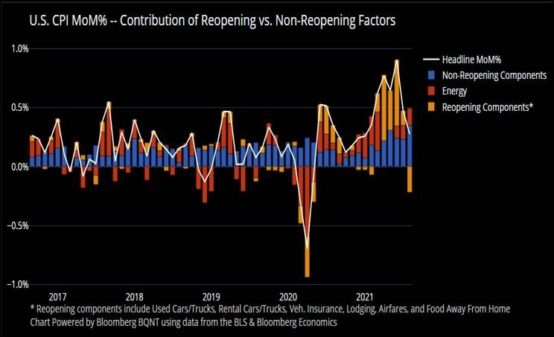 Policymakers and analysts generally believe that while longer-term inflation expectations remain anchored, policy can, and should, look through temporary signs of inflation. Since the 1990s, inflation in many advanced economies has run somewhat below 2%, even in good times. For now, the Fed’s viewpoint is that it’s more likely these dynamics will continue to normalize as the pandemic fades into the rearview – whenever that may be.

Perhaps inflation is not transitory

Indeed, several current factors suggest inflation could be transitory. There are persistent supply chain issues, but as the world’s supply chain adapts to operating in the COVID-19 environment, this could quickly abate. Similarly, commodity prices (also often driven by supply chain issues) are making the end-user costs of construction, durable goods, foodstuffs, and pretty much everything, more detrimental to the household bottom line. And let’s not forget about the labor market. We recently saw an epic mismatch driving high labor costs, with nearly 11 million open positions compared to 8 million unemployed job seekers. Baffling, no doubt.

However, as federal stimulus programs are gradually drawn out of the labor market, this phenomenon could come into balance quite swiftly. But, for all the Fed’s focus on these temporary factors, the one element they do not discuss much is the impact their actions have on the money supply.

Most readers may be familiar with the current imbalance in the money supply. For better or worse, the gravity of the pandemic shutdown gave the U.S Federal Reserve Bank carte blanche to throw the kitchen sink of monetary tools at the economic slide — and they certainly did.

The graph below shows the M2 money supply (blue line), and the Velocity of M2 (red line). The money supply (M2) is up an incredible $5.5 trillion since before the pandemic, or a whopping 32%. That is a huge jump, especially when taken against the slow, smooth increase that has been the norm for over 60 years. Even after the Great Recession 2008-2009, the slope of the curve picked up, but there has never been such a rapid increase in the money supply. That is a lot of new dollars for the economy to absorb.

However, for now, it appears much of that new cash is sitting in bank accounts, or at the Fed, according to the velocity of M2. The velocity of M2 tells us how often a single dollar is “turning over” in the economy. Higher velocity means more spending/dollar churn, lower velocity is the opposite. It is a key inflationary indicator – the greater the velocity, the higher goods and services are pricing based on that spending pattern. And that is largely true.

As you can see from the chart, the velocity crashed precipitously coming into the pandemic, and has yet to recover. The velocity of money has crashed 23% in the last 18 months since the pandemic and is currently hovering around historic lows – another unprecedented phenomenon.

Monetary inflation is a simple economic supply argument- the more of something that exists, the less it should be worth. It is an important distinction from the commodity/supply/cost side of inflation that is far more reflective of the producer than the consumer. And while those same monetary phenomena exist for producers as with consumers, we are going to focus on the demand side of the argument in a vacuum. We want to consider, if more dollars are chasing the same amount (or even fewer) goods, the cost of said goods should rise, all else equal.

So, what does this tell us? We saw money supply surge 32%, and velocity of money plummet by 23%. It essentially means that despite the barrage of liquidity levied by the Fed, spending appears static overall. And this, in fact, is a deflationary indicator. Why do we point it out? We can abandon economics for a moment and turn to a harder science. In physics, the term potential energy loosely considers the energy stored in an object in relation to a system of other objects and their inclination to unleash that energy. In our case, the monetary supply is the object with tremendous potential energy, and the money velocity is the relative object or system. While the current monetary situation appears muted, should velocity normalize toward the area we know is the modern equilibrium, the demand-pull inflation (holding other current variables constant) would be an absolute shock to most income groups in our consumer driven economy. And that, in our opinion, is the biggest inflationary risk we see that could have meaningful long-term consequences.

Some good news about bonds

Conventional wisdom tells us inflation is your bond portfolio’s worst nightmare. And it is likely true because as yields (eventually) start to rise, the bonds you own will inevitably be less attractive in the secondary market. But a recent piece in the Wall Street Journal by columnist Mark Hulbert pointed out a critical and not widely known occurrence. In the stagflationary period broadly defined as 1966-1982, fixed-income portfolios actually outperformed equities and even beat inflation.

By any basic understanding of stagflation (low growth combined with high inflation), the 1966-1982 era certainly fit that bill! One would think that bond portfolios were decimated during this period, but what actually happened? Intermediate U.S. Treasuries outpaced inflation from 1966-1982, returning 7% during the period. At the same time, the S&P index matched inflation at 6.8%, and this was during a period where equity dividends were substantially higher than the modern era.

So, what gives? Why were bond investors focused on intermediate duration able to outpace massive inflation during a stalled economy? The simplicity of the answer may be surprising, but Hulbert argues it was the disciplined adherence to an intermediate duration bond ladder. By maintaining a strong focus on intermediate duration, bond investors were able to capture rising yields on the longer end of their horizon as lower yielding securities on the short end matured. It is almost laughable to think that despite all the complex financial engineering prevalent in our modern capital markets, at the end of the day, bond portfolios that stayed the course during one of the most troubling economic times in American history were able to maintain the value of their holdings by strategically targeting intermediate duration and taking advantage of rising market yields in the process.

If there is a moral to the story for our bank and institutional readers, it is that there is a historical precedent to maintaining your fixed-income portfolio strategy even at a time where it seems counterintuitive. Doing so may serve you well and could help protect the value of your assets even in the face of rapid inflation.

In the seemingly remote chance we have a new stagflationary era start to shape up, we will have to circle back with you as there will be much more to discuss. While the definition of “transitory” appears to be longer than we were hoping, it certainly seems more likely than not that these supply chain kinks will work themselves out over time.

This communication is provided for informational purposes only. UMB Bank, n.a., UMB Financial Services, Inc. and UMB Financial Corporation are not liable for any errors, omissions, or misstatements. This is not an offer or solicitation for the purchase or sale of any financial instrument, nor a solicitation to participate in any trading strategy, nor an official confirmation of any transaction. The information is believed to be reliable, but we do not warrant its completeness or accuracy. Past performance is no indication of future results. The numbers cited are for illustrative purposes only. UMB Financial Corporation, its affiliates, and its employees are not in the business of providing tax or legal advice. Any materials or tax‐related statements are not intended or written to be used, and cannot be used or relied upon, by any such taxpayer for the purpose of avoiding tax penalties. Any such taxpayer should seek advice based on the taxpayer’s particular circumstances from an independent tax advisor. The opinions expressed herein are those of the author and do not necessarily represent the opinions of UMB Bank, n.a., UMB Financial Services, Inc. or UMB Financial Corporation.

Tackling an unexpected expense: When to use credit cards versus your emergency fund (infographic)

Should you buy a haunted house?

How to protect against elder financial fraud